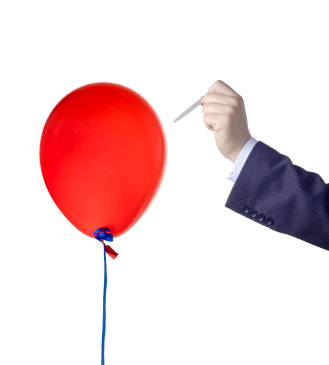 Inflation is technically an expansion of the monetary supply. Prior to the invention of fiat (i.e. paper) money, inflation occurred when pure gold or silver coins were melted down and mixed with less valuable metals. The end result was a coin that was worth less, even though it was the same size, shape and colour.

Another form of inflation occurred when people used to subtlety shave the edges of coins off and use that metal to purchase other items. The coins ended up becoming deformed, and had less metal than the used to have, making them worth less.

With fiat money, inflation occurs when a country prints additional money and puts it into circulation. The net effect is that people have more money to bid on items, which (due to the Quantity Theory of Money) causes prices to increase (if someone walked into an auction and gave everyone an extra $1,000 dollars for free, it’s reasonable to assume that everyone would bid more on each item, causing its final price to be higher – that’s the basis for the Quantity Theory of Money).

Unfortunately inflation benefits debtors at the expense of savers. Those people that work hard and save their money are predominantly affected, since the purchasing power of their money buys less each year due to inflation. Since money continues to lose purchasing power in the bank, inflation encourages people to stop saving and to start spending, which in Keynesian Economics la-la land, leads to increased consumer spending and a growing economy (at least in terms of the GDP number).

Despite the prices of gas, food, most commodities, gold and silver steadily increasing, the US government still insists that core inflation is low, and large scale price inflation isn’t taking place.

The truth is that it’s in the governments best interest to understate inflation numbers since many of their liabilities (such as social security) are indexed to inflation — if inflation goes up, the government will owe more money. As a result, the formula to calculate the core price index (CPI) has been slowly altered over the years to continually produce a relatively understated metric for inflation, even though the real-world prices seem to be growing at a much quicker pace.

One of the tricks the CPI formula uses to keep the metric low is to remove food and energy from the CPI. Their reasoning for doing so is because food and energy are too volatile (they change too much and too often), and would skew the numbers on a month-to-month basis. Unfortunately, since food and energy consume a large portion of most family’s disposable income, the removal of those items from the CPI limits its usefulness in tracking price inflation.

Another method they use is called Hedonics. If the price of a car increases by 20% year over year, but the new car is slightly more fuel efficient, then often they’ll skew the numbers lower to try and take that into account. It doesn’t matter that from the perspective of the typical consumer that the actual price of a car is greater year over year, it only matters than the car now does more so in that case it wouldn’t increase the CPI much.

Yet another trick they use is to assume that people will stop buying items as they become expensive, and buy cheaper items instead. For example, if a family is used to eating prime-rib twice a week, eventually they’ll switch to eating exclusively hamburger if the price of prime-rib goes up too much. From a CPI perspective, the value wouldn’t change very much due to rising prices of prime-rib, since it’s assumed people would just switch to hamburger.

Unfortunately what that ultimately means is that the current CPI is really a metric that tracks the change in prices for a continually decreasing standard of living, which was never what it was meant to track.

This should all be clear with this next chart, which shows the difference between the official government CPI numbers and those same numbers using the old CPI formula as it was originally developed (image courtesy of ShadowStats.org).

As you can see, the current CPI (based on how the government currently calculates changes) shows an inflation rate of around 2% (which they are saying is low), but the true inflation (or at least, the inflation metric as it was once calculated), is tracking more like 9% year over year.

If you trust the 9% number (which I believe is a more useful metric of inflation than the current one that uses fancy substitution math to come up with a metric that represents a reduced standard of living), then the purchasing power of every dollar is effectively halved in only 8 years. That means whatever you have in the bank will be worth only 50% of what it is today by the year 2018.

Kind of a crappy deal, isn’t it?