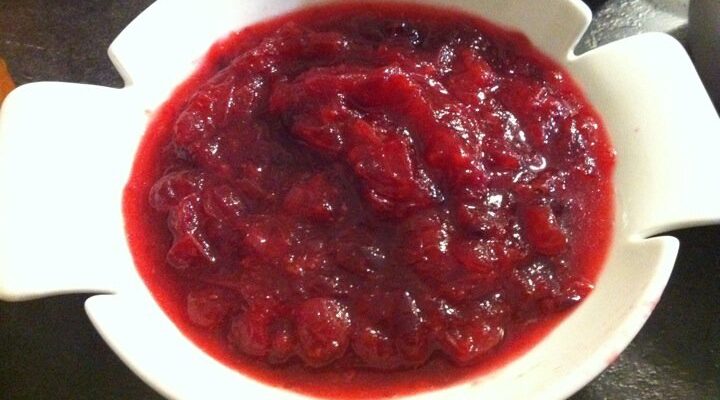 Well, I cooked my first thanksgiving dinner tonight, and for the most part it went off without a hitch. First, based on suggestions people made on this site, I decided to brine the turkey before hand. Brining involves soaking the turkey in a salt/water solution for 12 hours or so before cooking it, and ultimately forces moisture into the turkey, keeping it nice and juicy. My grandma hates dry turkey, and she couldn’t believe how moist the one was that came out of my oven, so definitely mission accomplished. I was a bit worried the meat would taste too salty, but that wasn’t the case at all.

On a whim, I decided to make homemade cranberry sauce, and it was a huge hit. Given that I don’t actually like cranberry sauce, I had to solicit some feedback from people shortly after making it, but everyone loved it so that was great.

I was a bit disappointed with the dressing and the gravy. First, I used whole wheat bread for the dressing, and I think if I were to do it again I would use white bread. I try not to eat anything refined, but whole wheat bread just seems too dense for the stuffing, and neither myself or my brother-in-law enjoyed it as much as normal. Nobody else complained, but I wasn’t a fan.

In terms of gravy, I made the assumption that I could probably mix some of my chicken stock with the turkey stock to make a bit more flavourful gravy if I needed to, but I actually think the two stocks clashed, which makes sense I guess but surprised me once I tasted it. I also used a bit of white wine in the pan, which I don’t normally do, and I think the wine added a flavour to the gravy that provided too much contrast. Once again, nobody else minded at all, but compared to my chicken gravy (which I absolutely love), I wasn’t a fan of the turkey gravy I ended up with tonight.

I made my second batch of pumpkin cheesecake tonight, and fixed a few of the issues with the one I tried practicing on a few days ago. In fact, my sister said it was about 10 times better than the one I made the other night, and I thought it was really good too. So, pumpkin cheesecake is now in the culinary arsenal for future use.

So, thanksgiving dinner is a wrap.

I’ve been purposefully trying to keep my apartment in order primarily because of thanksgiving dinner. Now that it’s over, I can start tearing down my apartment and boxing it up. While I’m looking forward to my trip, I’m not looking forward to the process of selling my furniture or boxing everything up. But, it needs to be done, so I’m going to start tomorrow.

I’m also probably going to set my Christmas tree up tonight. Yes, laugh all you want, but I like Christmas and I only have about six weekends of time left in my apartment and then it’s gone. So, I’m going to set it up a little early and get a bit of enjoyment out of it before my tree spends Christmas in some storage facility in December.