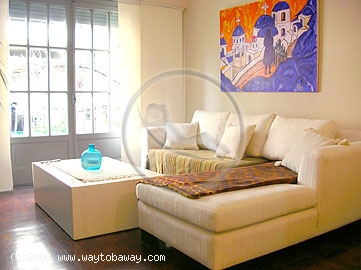 This morning I put a deposit down on a nice apartment right in the heart of the trendy area in Buenos Aires, Palermo Soho. Soho, of course, is a reference to a hip, upbeat area in New York City.

Given that I’m only staying for three months, I thought I would spend my time in the cool part of the city. Palmero Soho is extremely green, with lots of parks and trees. In addition, it’s also full of great restaurants, pubs, patios, and shopping.

In Buenos Aires it’s next to impossible to get a super cheap apartment unless you have a local guarantor. That said, the place I’m renting is a pretty good deal at $1,100 a month, considering it’s fully furnished, in a great part of town, and also includes all of the utilities.

I could have probably saved a few hundred dollars by waiting until I arrived to find an apartment, but I’m ok paying a bit more in exchange for not having any more stress when I arrive. The agency I used is one of the bigger ones in Buenos Aires, WayToBAWay.

So, that’s one more thing off of my plate prior to my big trip.

I’m definitely getting excited now. Buenos Aires is known as the Paris of South America, and I’ll be living right in the heart of it for three months.

If anyone wants to see a few more photos from the apartment, head over to my Flickr page. Also, if you want to keep up to date with my big trip (which will start in Buenos Aires, eventually ending up in Europe somewhere, or maybe even New Zealand), then follow the RSS feed.