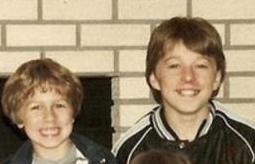 Me and my cousin, Corey

About a week ago, I got word that my cousin Corey had died back in Chilliwack. It obviously caught everyone off guard, since he was only 38 years old and was relatively healthy. As a family, all we have been left with are questions, sadness, and the hole where Corey’s life used to be.

When I originally set out to Argentina at the start of this year, my mom sat me down and we talked about what would happen if someone were to pass away while I was gone. Obviously if possible, I would do my best to get back home for a funeral or support. But I was told by my mom, and later reiterated by a few other family members, that I shouldn’t feel guilty if I couldn’t make it back for a funeral.

As it turns out, the funeral for my cousin is scheduled at the same time as my flight to Tokyo this Wednesday. While I haven’t really seen my cousin in about seven years, I checked into changing my flights around such that I could attend the funeral here in Chilliwack. But unfortunately due to the cost of my original flight and the restrictions on it, changing it by a few days at this time simply isn’t possible without incurring a huge financial penalty. So as a result, I’m not going to be able to attend my cousin’s funeral, which is obviously hard for me and I imagine a bit disappointing for some of my family. But I spent the morning sharing stories about my cousin with his brother, the afternoon going through photos with my mom and my sister, and the evening over at my aunt and uncle’s to lend whatever support I could in these difficult times.

So as I get ready to head to Thailand after several months of planning, it will be a bittersweet departure. My cousin had such a big heart, and he will be missed by all of us.