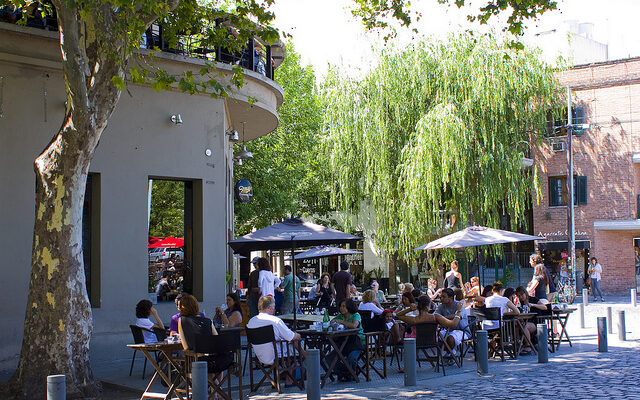 I just got back from a little walk around Palermo Soho. It’s about 32C right now, and it sure is a nice change to wear shorts and a t-shirt compared to the rain and cold gear I had on back home.

Without further ado, here’s a little video I shot today with my new HD Kodak Playsport:

I spent yesterday trying to get a SIM for my cell phone down here. I basically walked all the way from Palermo Soho to Recoleta, which took me about 45 minutes each way. It was quite the adventure, and it’s still not quite over. I’ll post more about the cell phone situation once there’s a bit of resolution to it.

Truthfully though, I haven’t had data on my cell phone in about four days now, and it’s pretty nice walking around without having my phone vibrate or chirp all the time. So, I’m not in any hurry to get a data plan going on my cell phone. I may just get a local number in case anyone needs to contact me for emergencies, and not worry about data. I didn’t fly to South America to be on my phone all the time, so I’m quite content leaving it at home during the evenings and weekends if need be.

Palermo Soho is definitely pretty. There are these amazing huge trees pretty much on every street, and they provide some welcome relief from the hot mid-day sun. What’s also amazing are the number of people who just relax on little patios, having a coffee or a beer and just socializing with their friends or family. In addition, many people stay out until 3am or 4am on those same patios, and last call for alcohol is more of a suggestion than a rule I think around here.

I spent a bit of time trying to learn Spanish prior to arriving here, but I didn’t put in as much effort as a I should have. Also, the book I was using was pretty hard to follow, and I was constantly backtracking to try and figure different concepts out. Last night I browsed the Kindle store on my iPad and picked up a much better book, and I’m already further ahead I think in one good night than I was in several weeks before arriving.

I’ve definitely found the language barrier to be more difficult to navigate than I first envisioned. It seemed like many store owners in Tokyo spoke english, so I never had any difficulties there. But there are very few small store owners here that speak english, and I’ve been forced to try and communicate using my very basic Spanish and sometimes even hand gestures. The problems I’m having with my cell phone, for example, are simply not solvable without getting the help of a local who can call customer support for me.

But, I’m now really motivated to learn Spanish, and am going to put in some solid time over the next few weeks trying to progress to the point where I can communicate out in public more effectively. There are lots of events in Buenos Aires where you can go and practice Spanish, but at the level I’m at I simply don’t think I’m ready yet. I’m hoping to pay for some private lessons over these next few weeks so I can get some more practice.

I went out to a pub the first night I arrived and ended up drinking until about 4am. Since then, I haven’t been able to fall asleep until between 5am and 6am every night, which is a pretty big drag. The difference in time between Buenos Aires and Vancouver is 5 hours, so I think some of that is jet lag. So tomorrow I’m going to set my alarm and force myself to get up at 10am so I can return to a more normal sleep schedule, even if it means I’m a zombie tomorrow.

I few more people from Vancouver arrive tomorrow, and I may take it upon myself to organize a little Tweetup next week somewhere. If you’re here and are interested, then drop a comment with your Twitter name, otherwise I’ll find some of you on Twitter when something is about to happen.