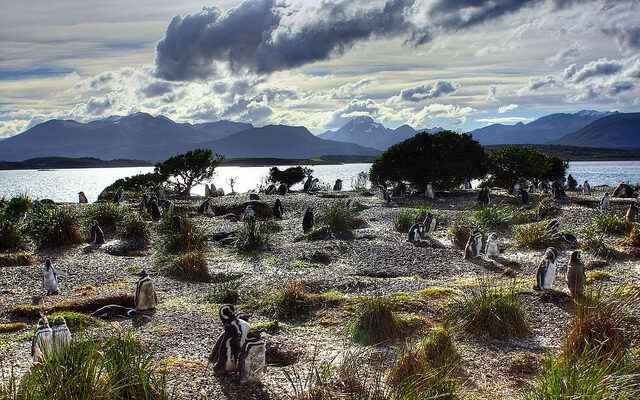 So, I’ve lost track of how many days that I’ve been here. I was originally coming for something like 87 days, so it must be near day 80 or so. As the title of the post says, I’m down to only 8 days left.

I spent the weekend down in Ushuaia, Argentina, the southernmost city in the world. I had a great time, and was almost sad to leave when the time came. Staying in a hostel was a great experience, and I always had people around. Compared to Buenos Aires, where I work mostly solo during the weeks, it was nice to have some company around again, even if for a few days.

I’ll do a full trip review as soon as I have an evening to spare here, but I’ll highlight a few things. First, I did indeed see penguins, and they are as cute as I imagined. While I didn’t capture it on video, there were these two Gentoo penguins that noticed each other along the beach and started running towards each other. Seeing these two penguins waddling down the beach towards each other with their arms (flippers?) spread wide is enough to make anyone break a smile.

Penguins at the End Of The World

The main international airport down here is EZE, and it’s the one I flew into when I arrived from Vancouver. It’s about a $40 USD cab ride to downtown, and the airport also charges a $75 USD reciprocity fee for Canadians when they land. So, imagine my surprise yesterday when the captain came on the PA system at 33,000 feet and told us we would need to divert to EZE airport because AEP was shut down.

Obviously having a place to land the plane is a good idea, but landing at EZE probably would have set me back another $100 due to the cab ride and reciprocity fee I would have to pay again (you don’t have to pay it at AEP, which is why I’ve been using that airport for local travel). They may have had some provisions to help with those, since none of us were supposed to land at EZE technically, but I imagined it would have been a problem trying to sort it out.

Anyways, shortly before landing at EZE they rerouted the plane once again and we landed at our original destination, AEP. Once I entered the terminal, the flight status of every flight on the monitors said “Ask Agent”, so the airport was down for the count. Shortly after leaving, Buenos Aires cancelled all flights in all three airports due to a failure of the ATC communication systems. So, I imagine there were a lot of upset people last night in Buenos Aires.

In a week today, I’ll be leaving my apartment and doing my last loads of laundry prior to New York. At this point in time I’ve seen all that I wanted to see within Buenos Aires, so I’m ready to leave and see something new. I have a few friends to say goodbye to over the course of the week, and Henry is in town this weekend (which will allow me to see a few sites I still haven’t gotten around to), and then I’m out of here. I’m not looking forward to the 15 hours of flying I have to do to get to New York City, but I still have a few ativan tablets left, so hopefully I can sleep for a lot of the flight.

My landlord here is building a coffee shop downstairs, and it’s opening soon. Unfortunately that means they are all working double time, and I was woken up at 7am with the sound of hammering and banging. Given that I’m a foreigner here, I don’t really have a lot of recourse for that kind of stuff. But I’m leaving in a week, so I’ll just bear with it for now.

Anyways, my South American journey is almost at an end. I’ll do a full post when the time comes, but it’s been a great experience. I have eight more days of exploring and visiting to do, then the Migratory Nerd heads somewhere new.