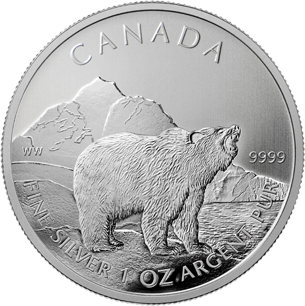 When I first looked into purchasing a few silver coins, I did it under the assumption that the coins would mostly be worth value due to their intrinsic silver content (called the ‘melt value’). While some collectors coins fetch a hefty premium on top of their melt value, most bullion and high purity coins are mainly traded for their metal content.

That said, I read a post recommending the purchase of the Canadian Mint’s “Silver Wolf” coin a while ago as opposed to the Silver Maples since the author claimed they would fetch more value in the after market. Sure enough, a quick browse of eBay showed many $30 coins fetching around $50.

The reason? According to the author “there’s always some old grandma that wants to get a wolf coin for her grandkid.”

Compared to bullion, coins are a good investment because they are far more likely to be accepted as an alternative currency. Assuming the economies of the world start collapsing (and I don’t think that’s going to happen, I’m just pointing this next part out), it’s more likely you’ll be able to trade a silver coin for food than a big hefty piece of bullion. It also stands to reason that coins that are more scarce are more likely to fetch a price premium than ones that are readily available.

That’s why the recent announcement of the Canadian Mint’s newest “Grizzly” collection appeals to me. First, there’s the eBay grandma factor, which is exciting. If grandma’s like wolves, they’re gonna *love* grizzles! Second, both the “Wolf” and the “Grizzly” are produced in reduced quantities, so they’re relatively scarce compared to the Silver Maples.

I emailed J&M Coin in Vancouver and asked about the “Grizzly”. It turns out that their first shipment is expected to arrive in the middle of March. So if you’re looking to collect some new coins from the Canadian Mint, or to grab a bit of silver in case the world explodes, March would be a good month for it. I’m hoping I can convince someone to grab me a few as keepsakes, since I’ll likely be in Ushuaia, the southern most city in the world, when the coins hit the shelves in Vancouver.