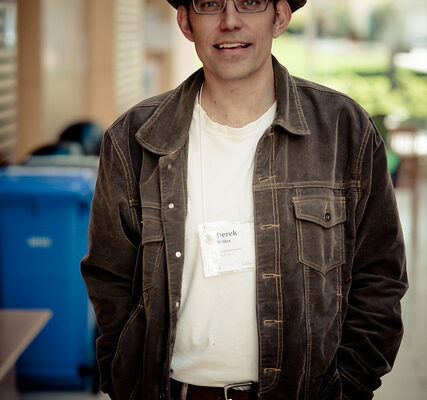 As everyone in Vancouver now knows, Derek Miller passed away Tuesday evening and his final blog post, written before his death, was published online first thing in the morning. When I first read the post, I did so thinking it was an actual update from a living Derek, and had to read it twice before it sunk in on me that he was actually gone.

I never knew Derek Miller before cancer. The first time I heard his name was at Northern Voice in 2007 I believe, and a few people organized a video to be created to eventually be shown to Derek. It wasn’t until a social event at BarCamp that I actually got to meet Derek, who at the time was fairly thin and walking with the help of a cane.

I also never really knew Derek outside of the social media scene, although I still called him a friend. But we never had a chance to sit around a BBQ and drink a few beers, or to watch a Canucks game, or to spend an afternoon walking around Stanley Park and shooting photos. But I’m thankful for the chats I did have with Derek over the years, the comments we left each other on our blogs, and for having the chance to know Derek Miller before cancer took him away from everyone.

Like many people, I always silently hoped that Derek would make a miraculous recovery and the cancer would suddenly disappear. While Derek updated his progress (or lack of) from time to time on his blog, it never really sunk in that he was dying, probably because you’d still see him out occasionally or see the odd tweet from him on Twitter. But in the last few weeks it became clear that Derek was running out of time, and that he had made his final peace. About a week ago Derek stopped taking visitors, and we all knew the end was near for our friend.

And so, my thoughts and heart go out to the Miller family during this difficult time. None of us who knew Derek will ever forget him.