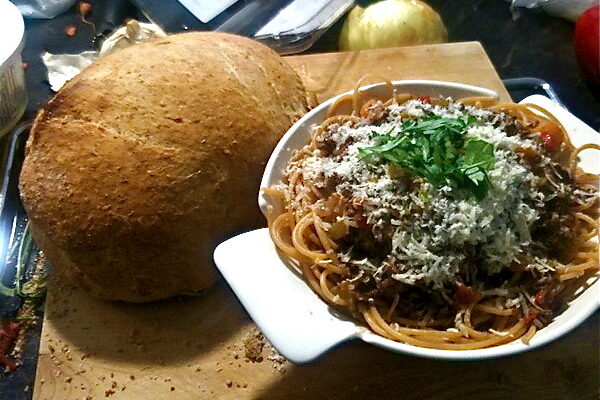 As I get older, I find I’m more and more of a homebody. Some of my friends think it’s a bit strange that I enjoy hanging out around the house on my weekends, but truthfully, I find it a lot more enjoyable than hitting a pub and ending up with a hangover. While I enjoy a good patio beer as much as the next guy, I also enjoy putting on some music and tinkering away in the kitchen whenever I have a bit of time.

Cooking is definitely something that’s relatively new to me. When I lived in Vancouver a good home-cooked meal usually involved beef-jerky or some bologna from the little store downstairs. Other than Urban Fare, there really wasn’t any place near me where I could get wholesome groceries at good value, so I tended to eat out most of the time. Now that I’m used to cooking for myself at home, I find I enjoy eating out at restaurants less and less.

Last night I set out to make some homemade Spaghetti Bolognese, which is basically Spaghetti with a beef and wine-based broth, and some whole-wheat bread. I tend to stay away from as many carbs as possible in a normal day, so bread and pasta at the same time is a pretty big treat for me. In both cases, I opted for whole wheat varieties, partially because I like the taste a bit better, and partially because both have lower glycemic loads (10 vs 9 for the white vs whole-wheat bread, and 27 vs 16 for white vs whole-wheat pasta). I also like my pasta to be a bit tough (also known as al dente in Italy), which further decreases the glycemic load of the pasta.

Bolognese sauce is actually really easy to make, and is super tasty. I’m sure there are lots of recipes available that indicate how much of each ingredient to use, but since I’ve made it a few times now I just sort of wing it. Basically you sweat some chopped carrots, onion, celery, and some garlic in a little bit of olive oil. While that’s cooking, you can brown some ground beef (or some vegetarian equivalent) in a separate pan/pot. When the meat is done, simply drain the fat off and stir in the vegetables. Add some chopped tomatoes (de-skinned Roma tomatoes are my favourite), about two cups of beef stock (I usually buy the organic cartons from the supermarket), two tablespoons of sugar, and about 1 cup of red wine. A lot of people use cheap wine for dishes like this, but I’m a believer in the saying that you should never cook with any wine you wouldn’t want to drink. If you buy a bottle of wine, you can simply use a cup or so for the sauce, and save the rest to drink with dinner. Add a tablespoon each of freshly chopped basil and oregano, a couple of bay leafs, and then simmer for about two hours. During that time the alcohol in the wine will slowly evaporate and the flavours will blend together.

Given that the sauce needed a few hours, I figured it was as good as time as any to make some fresh bread. Whenever I tell people I make bread at home, everyone always acts like it’s an amazing feat. Truthfully, making good bread at home is a lot easier in my mind than making a lot of other dishes. While there are a lot of variations of bread, making a simple whole wheat bread is fairly trivial. Basically you add a bit of yeast (two teaspoons usually) to a blend of flour and water, knead it, and let it rise a few times. I don’t really measure the ingredients in my bread, mainly because you always have to adjust them at the end anyways based on the consistency of the dough. Basically you want dough that is slightly spongy, but not wet.

The trick to making decent bread is having a pizza stone or other clay stone. I’ve heard that some people use an actual clay tile from Home Depot for this — if you go that route, make sure you get one without any finishing or chemicals on it. While not a direct substitute for a real baker’s oven, a pizza stone is a pretty good substitute for use in a typical kitchen. Pizza stones can break if their temperature changes too fast, which is why the stones should be heated up gradually in the oven. I usually do the second and final dough-rising directly on the pizza stone while it’s sitting in a cold oven, that way I can simply flip the oven on when the dough reaches the proper size.

I typically cook my bread at between 425F – 450F. If I were to time it, it would probably take between 30 and 45 minutes to cook, but I mostly just pull it out when the crust looks right. If you use a pizza stone, make sure you put a fairly generous layer of flour over it before setting the dough down, otherwise you’ll have a very hard time separating the cooked bread from the stone after it’s cooked.

As with most sauces, season to taste with salt and pepper right before serving. In terms of toppings, freshly chopped parsley and parmesan cheese both go well on pasta, and is what I ended up garnishing mine with. All in all, it took me a few hours of work, but most of the work happens in a few 5 – 10 minute bursts, which makes it a good meal to make while watching a few movies or chilling out on the weekend. I drank a Pale Ale while eating this, but a nice red wine would go quite well with it.