About four years ago, the push for new television technologies first emerged, supported primarily by advances in LCD and plasma technology. Many of these new televisions supported high definition (HD) content, at least in the traditional 720p variety.

While Europe is ahead of North America in this regard, we have slowly been migrating most of our North American television services to digital, and in most cases, HD. I believe the US has a target date of around 2013 to be completely digital.

HD content looks, quite simply, amazing. Which is why Hollywood has spent the last few years humming and hawing over what to do about HD content distribution. The problem of course, in their eyes, is that HD content piracy has the potential to undermine further industry revenue sources. The solution, at least in Hollywood’s eyes, is multifaceted, involving both software and hardware anti-piracy mechanisms.

Most people making television purchases in the last few years were told that their TVs would be HD-ready, and when the time came they could simply plug in HD content and it would just work. Unfortunately, since that time, big business has basically mandated that certain HD content MUST make use of an encrypted HDMI interface, something most older HD televisions do not have.

Last year, the first HD DVD players started hitting the market, but due to the greedy nature of people in Hollywood and the IP holders on some of the technology, two competing technologies ended up being released onto the market: HD-DVD and Blu-Ray.

Because of that, consumer adoption has been extremely disappointing, and video stores have hesitated to carry content simply because most of it would have to be duplicated, taking up precious floor space. About six months ago I picked up a second generation HD-DVD player, and have been disappointed not only with the lack of quality content for it, but also for the problems inherent in an early product. Even after updating the firmware three times, several brand new discs are still unable to be played due to constantly changing specifications and feature sets.

Time and time again, the entertainment industry has made this same mistake with the same results. Remember the fight between Beta and VHS? How about the battle between Sony’s SACD and the DVD-Audio format? The whole episode between HD-DVD and Blu-Ray is a complete embarrassment, and even the president of Sony says he wishes, in retrospect, that they hadn’t come up with their own format, and instead had worked harder to develop a joint format.

Yesterday Warner Brothers agreed to exclusively back the Blu-Ray format, which in my eyes is almost the death knell for the HD-DVD, which obviously sucks for me (although I knew going into it that it was a risky venture). 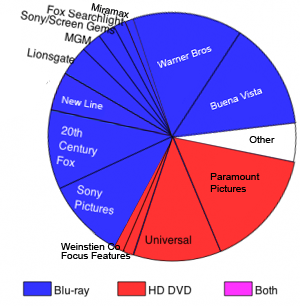 When I started my master’s degree at UBC four years ago, I chose to do it in the area of high definition video compression, foreseeing a future when everyone would have HD content at home. My dealings with the industry were frustrating, and even though the research I did was exciting at the time, I had an extremely hard time convincing anyone in Hollywood to even lend me thirty seconds of HD content to do experiments with. Since then, I have been nothing but disappointed with the entertainment industry, especially with the complete debacle the last few years have been with regard to HD DVD players.

We are on the verge of the collapse of the whole concept of the cinema if you ask me. There was once a time when you would go there and have a great experience, one that you couldn’t possibly mimic at home. But my system at home, even though it isn’t worth that much, looks a lot nicer than the screens at the theatre, sounds comparable, and I don’t have to put up with long lines, expensive popcorn, or 30 minutes of adverts on each movie I watch. Sure, you can’t replace the social experience of a movie outing, but at what cost is everyone willing to obtain that experience in the future? I think Hollywood is rocking dangerously on a precipice, and if they don’t starting thinking about the consumer instead of their pockets, they are going to alienate future generations of movie goers, most of whom are already looking to bittorrent and bypassing the traditional movie experience.

I have always viewed piracy as the result of a problem, and not the problem itself. It’s like blaming a garbage filled beach on a bunch of inconsiderate people, even though there were no garbage cans around to be used. If movies were affordable, and worth seeing, I think most people would pay to see them. But nobody wants to pay $20 to go see a 70 minute movie disguised as a 120 minute one due to adverts and long lines.