In 1977, the same year I was born, NASA launched the Voyager 1 spacecraft with a mission to explore our solar system. It is still operational, and is located some 9.3 billion miles from the sun. At that distance, light (including radio waves) takes nearly 14 hours to reach our planet. By comparison, light from the sun takes about 8 minutes to get to earth.

17 years later, as voyager passed beyond the edge of our solar system, engineers at NASA turned the Voyager 1 spacecraft around, pointed it towards earth, and took a few shots of our planet. This is one of them. 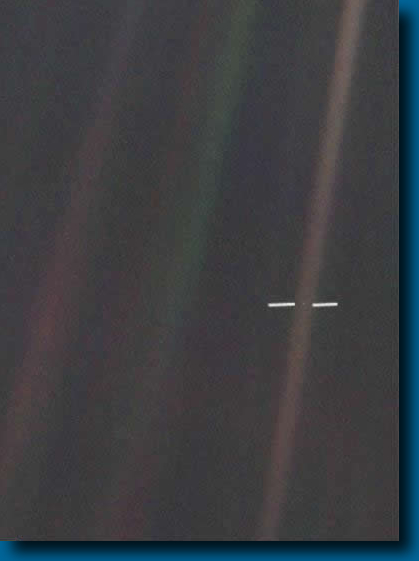 We’re that little speck on the right. Pretty humbling.

In that same year, Dr. Carl Sagan, an astronomer, gave a talk where he first presented this rare photo of Earth. Here’s what he said.

We succeeded in taking that picture [from deep space], and, if you look at it, you see a dot. That’s here. That’s home. That’s us. On it, everyone you ever heard of, every human being who ever lived, lived out their lives. The aggregate of all our joys and sufferings, thousands of confident religions, ideologies and economic doctrines, every hunter and forager, every hero and coward, every creator and destroyer of civilizations, every king and peasant, every young couple in love, every hopeful child, every mother and father, every inventor and explorer, every teacher of morals, every corrupt politician, every superstar, every supreme leader, every saint and sinner in the history of our species, lived there on a mote of dust, suspended in a sunbeam.

The earth is a very small stage in a vast cosmic arena. Think of the rivers of blood spilled by all those generals and emperors so that in glory and in triumph they could become the momentary masters of a fraction of a dot. Think of the endless cruelties visited by the inhabitants of one corner of the dot on scarcely distinguishable inhabitants of some other corner of the dot. How frequent their misunderstandings, how eager they are to kill one another, how fervent their hatreds. Our posturings, our imagined self-importance, the delusion that we have some privileged position in the universe, are challenged by this point of pale light. Our planet is a lonely speck in the great enveloping cosmic dark. In our obscurity — in all this vastness — there is no hint that help will come from elsewhere to save us from ourselves. It is up to us. It’s been said that astronomy is a humbling, and I might add, a character-building experience. To my mind, there is perhaps no better demonstration of the folly of human conceits than this distant image of our tiny world. To me, it underscores our responsibility to deal more kindly and compassionately with one another and to preserve and cherish that pale blue dot, the only home we’ve ever known.

Those words ring just as true today, as humanity continues to launch wars at each other, where countries continue to put more resources into developing weapons of mass destruction, where the planet continues to warm up but most people just ignore it, and where the prevailing mentality is that it’s ok to launch smart bombs into civilian areas and just accept the casualties.

Despite the advances we’ve made in technology, we are still no more mature as inhabitants of this planet than we used to be. We can split the atom, build skyscapers half a kilometer tall, fly at 7 times the speed of sound, send probes to other planets, and modify our own genetics, but we still cannot curb our own capacity for aggression and violence.

The age of the universe is currently estimated to be somewhere around 13.7 billion years old. If you look up in the sky and imagine every bright light being a star, and every one of those stars is probably surrounded by a bunch of planets, the realization that we exist at all is a bit daunting.

And yet despite the enormous cosmic improbability that life would exist somewhere in this universe, let alone on our little planet in the middle of nowhere, we still exist here somehow. And that makes the loss of life, any life, all the more tragic.

Out of 13.7 billion years, the average human lifespan of 75 years seems so trivial. And for any person or government to deprive another person of the priviledge to exist, for whatever reason, seems like the greatest cosmic tragedy imaginable. And ever since November, that one thought has been on my mind a lot lately — that life is really a gift, albeit a fragile one.

Someone once said that most people live on the world and not in it, and I would agree with that. Most people try not to think about the problems of the world, or those that exist in their own backyard, hoping that either someone else will take care of them, or that they will just magically disappear on their own. And I’m entirely guilty for that as well.

Which is why this year over Christmas I decided that I was going to be a bit more proactive about trying to make the world a better place. And I don’t know entirely what that means yet, but I do think it’s possible to make an impact with minimal effort. For me, that means taking leftovers outside instead of throwing them away. It means giving away a few dollars in front of 7-11 from time to time. It means maybe volunteering from time to time to lend support for those less fortunate. The little bits I’ve done since Christmas have all been very rewarding, and to see someone’s face light up when you give them a meal most people wouldn’t give to their dogs is a bit humbling.

So, while I normally write about upbeat things, I thought I had something to say here. I’ll leave this blog entry with the words of John F. Kennedy, spoken a few months before he was murdered in Dallas.

So, let us not be blind to our differences — but let us also direct attention to our common interests and to the means by which those differences can be resolved. And if we cannot end now our differences, at least we can help make the world safe for diversity. For, in the final analysis, our most basic common link is that we all inhabit this small planet. We all breathe the same air. We all cherish our children’s future. And we are all mortal.