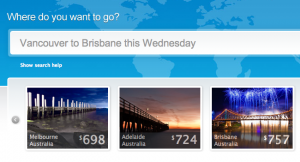 I had an idea roughly ten years ago out in Ottawa for a website or service that would let you pick your starting destination and get a list of possible ending destinations. That idea came out of a trip my friend Rob and I tried (unsuccessfully) to go on. We were both sick of our day jobs in Ottawa, had lots of money (compared to other 24 year olds), and had a long weekend coming up. So we started calling travel agents, telling them we didn’t really care where we went, as long as we got the hell out of town. Despite our efforts, we came up empty handed since none of the travel agents or their computer systems were really able to accommodate our request.

Jump ahead nearly ten years, and it looks like we’ve made some progress. I found a website called Adioso which advertises itself as a plain english search engine for travel. While still in a limited beta, it’s surprisingly useful for finding all flights out of a particular city within a particular budget. For example, the following are all valid searches on Adioso:

For someone like myself who is slowly making my way across the world, I think a site like Adioso has the potential to be an invaluable tool. All one would have to do is start scanning prices to other destinations a week or two before departing and pick the most appealing destination at the the time.

I probably won’t be able to make much use of that site until after I leave Buenos Aires, but I’ll definitely test it out when I get to Europe. If anyone else tests it out and uses a flight, drop a comment and let me know.