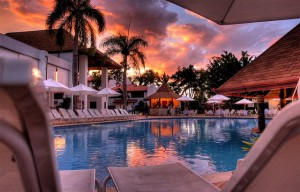 In just 45 days, I’ll be out of my apartment out in Chilliwack, and essentially homeless for the next 30 days. Truthfully, now that my place is partially boxed up, I’m getting antsy to hit the open road. My current plan is to have a lot of my stuff already in storage around November 1st, so I can possibly go visit a few people in the United States in November.

As I mentioned before, I’m also heading to the Mayan Riviera in just three weeks, which will be a nice break from the norm. I haven’t had a vacation in the sun since about the same time last year, so I’m definitely looking forward to chilling out by the pool with some beers and my Kindle.

The resort we’re going to is called the Bahai Principe just outside of Playa Del Carmen. We’ve been there once before, and liked it enough that we decided we would rather go back than risk getting something that wasn’t as nice. Thankfully I have a direct flight to Cancun this time, which should be a lot less painful than the milk run I went on last time (it took me around 15 hours to get there I believe).

My plan is to spend this upcoming weekend boxing more things up and possibly doing a few small runs to my storage locker. I’ll do a post shortly about the locker I found, and the total costs associated with everything so far.