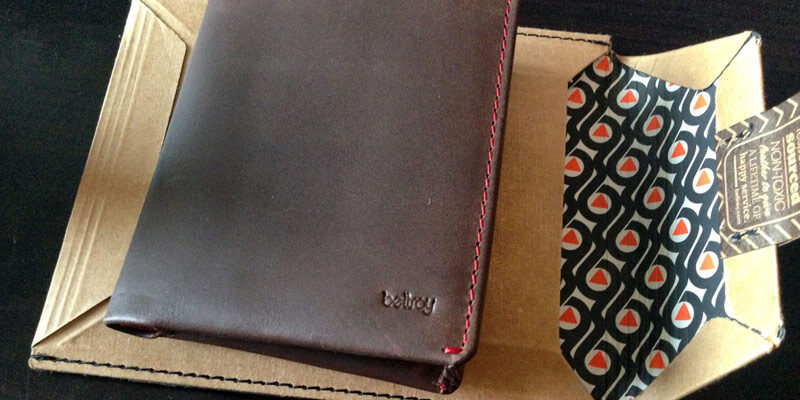 Despite the amount of cool technology I own (iPads, iPhones, etc.), I actually don’t really spend much money on anything else in my life, other than plane tickets when I travel. While I appreciate new clothes, my brain rarely comes up with the idea that I actually go buy some new ones. The one exception to that is socks – whenever I see a nice pair I generally always buy them. Which is why I probably own about 100 pairs (and even then it’s hard to find a matching pair from time to time).

That said, one personal item I have been shopping for recently is a new wallet. I can’t say that I’ve ever owned anything special in that department; usually I just head down to the mall and buy whatever I can find, often some faux-leather item for about $20.

But recently an Australian company called Bellroy has been in the news for adding some sex appeal in the wallet department, and a few articles caught my eye. What I liked about some of their wallets was the thought put into what guys actually put in their wallets. Anyone who has seen Seinfield can probably relate with the size of George’s wallet. Between my personal cards and my company ones, my wallet generally fills up pretty quick. Since I’m fairly used to downsizing things in my life due to travel, I thought now would be a good time to downsize the contents of my wallet while upsizing the coolness factor.

Bellroy has two lines of men’s wallets, one where the owner is expected to fold their bills (i.e. their money), and one line where they don’t. I have a hard enough time folding clothes let alone money, so I opted for the line where most bills can slide right in. And since I wanted something relatively minimalistic, I eventually opted for the Bellroy Note Sleeve Wallet:

A wallet should adjust to your lifestyle rather than forcing you to adjust to it. Inspired by tradition but brought to life through modern craft, our Note Sleeve incorporates first-rate construction and a versatile style that enables this slim wallet to alternate between work and leisure environments with ease. The Note Sleeve hits the sweet spot of functionality and sleekness, with a range of user-friendly features in a compact design that does away with pocket bulge. This leather wallet holds unfolded bills and coins, with easy-access slots for your main cards and a storage area with a convenient pull tab for infrequently used cards.

At $89, it’s definitely not a cheap item. But as I get older I much prefer buying higher quality items less frequently than cheaping out and having to replace items all the time. That’s always been my philosophy with technology – since my whole career path has been inspired and based off of most of the technology I use, I never hesitate spending money when it comes to anything gadget-wise. So I decided to start adopting that same philosophy in a few other areas of my life as well.

I chose the express shipping option, so my wallet arrived approximately one week after I ordered it. When I opened the containing envelope, I was pleasantly surprised with the actual packaging of the wallet itself. Here is my detailed Bellroy Note Sleeve Wallet review.

The wallet itself was encased in a thin protective paper, which in theory should minimize any scratches or what-not during the packaging process.

Sliding the wallet out

I say ‘in theory’ because my wallet did have a few very minor scuff marks on it when I removed the paper, but nothing really that noticeable. I assume all leather ultimately will scuff to some degree, so it’s no big deal. But I was surprised the leather wasn’t essentially pristine when I pulled it out.

Other than a few velcro wallets I had when I was a kid, every wallet I can remember has been black. This time I decided to try a different colour and opted for the brown version. I have to say, it did look pretty sexy when I pulled it out of the protective paper, so I’m glad I made that decision.

One of the goals for this new purchase was to significantly cut down on the contents of my wallet. To that end, I’ve basically opted to only carry the following inside:

Inside of the ‘Note Sleeve’ Wallet

So in total I have one ID card, two high-use cards, one medium-use card, and four low-use cards. Compared to my other wallet, that’s not a lot of content. But the reality is that I don’t think I could fit any more inside, and I’m ok with that.

I’ve only been using the wallet for about 12 hours, but already I’m extremely happy with the purchase. When you hold the wallet, it definitely feels like a high quality item. The placement of the cards is intuitive, and as long as you spend some time grouping items by how often you use them, the wallet is really functional. I also like the fact that you can store a bunch of different cards in the little pull-out drawer – it makes it so you can bring a few of the lesser used cards, but not enough to make the wallet thick or unmanageable.

‘Note Sleeve’ Wallet next to an iPhone 5

If you’re not prepared to downsize your current wallet (assuming you have a typical sized one), then you should definitely opt for one of the larger Bellroy wallets. But for me, this wallet is the perfect size, and it’s a high-quality item that I think is definitely worth the price paid for it.

If you’re looking to buy this wallet, then check out Note Sleeve Wallet on Amazon – I love mine personally, and it’s definitely the best wallet I’ve ever owned.

January 2017 Update – I still have and use this wallet, and it’s going strong.

If you’re looking for a new wallet but aren’t a particular fan of the Bellroy Note Sleeve Wallet, then check out some of these other bestselling wallets. I don’t have experience with any of them, but they all have a lot of good reviews.