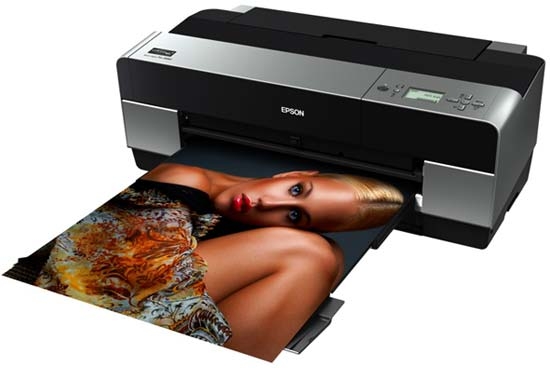 A while ago Epson asked me if I’d like to take their relatively new Epson Stylus Pro 3880 printer for a spin. Since I’m obviously into photography and the printer can easily accommodate colour prints, I thought it would be fun to test it out to see what it could do.

First of all, I should say that this is a BIG printer. When the courier arrived to drop it off you could tell he was having a hard time moving it. Once it was in my apartment, it basically blocked the entire front door. Being a typical bachelor I of course left it blocking the door for the majority of the evening, but eventually decided to slide it across my apartment and into my computer room.

My original plan was to put it next to the existing inkjet printer in my computer room, but it became obvious that there simply wasn’t enough room. So I had basically had to dedicate an entire table to the Epson Stylus Pro printer.

Most high-end printers have at least four ink cartridges, three for colour and one for black. The Epson Stylus Pro 3880 actually had nine print cartridges, which ultimately helps produce extremely realistic colours.

Epson sent me a few different types of papers to use in the printer, including some canvas. Unfortunately I struggled for about 30 minutes trying to get the printer to accept any of the paper. It seemed that no matter what I put into it, the printer would simply reject it. It’s quite possible I was doing something wrong, but loading paper isn’t normally something that’s very complicated. Eventually I managed to get a piece of canvas loaded and proceeded to print out one of my HDR images.

The print quality from the Epson Stylus Pro 3880 is actually really amazing. I showed the resultant canvas image to a few friends that were over that evening, and one of them immediately asked to take it home. As a photographer, that’s definitely a good sign. I went through a few different images that night in an effort to trick the printer out, but it performed admirably in all scenarios.

With a MSRP of around $1,295 for the standard edition, this is a pretty pricey printer for the average consumer. But if you make money from photography or have a business that would benefit from realistic colour rendition or the ability to print large 17″ large format paper or canvas, then this printer would be a great asset and I would definitely recommend it.

If you’re looking at picking one up, then check out the Epson Stylus Pro 3880 Printer on Amazon.