Preparing Your Car For Storage 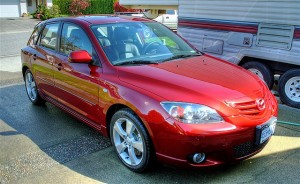 For some reason, I initially thought I could simply turn my car off prior to leaving for my year long adventure and it would be completely fine when I returned. After talking to a few people though, it turns out that you really do need to take special precautions to make sure your car will actually be functioning if you leave it for any extended period of time. So if you’re looking to leave for more than a month or so, you should make sure you take the following precautions with your vehicle. What To Do Prior To Leaving Over-inflate […]

Hard to believe I’ll be getting on a plane in 10 days and heading on vacation for two weeks. Truthfully, I’m really looking forward to relaxing by the pool with a few books. Reading is something I get a lot of enjoyment out of, but for whatever reason I go through big periods where I don’t really read all that much. So I’m hoping to hit a Chapters store before I leave and grab a pile of books. Like most vacations, I’m debating whether or not to bring my digital SLR. Truthfully, I think I’m going to leave it at […]

Out With The Old, In With The New

I spent some time at lunch today giving my car a bunch of TLC. I’ve noticed this last little while that the tires are slipping a lot, so I suspected that they were pretty much toast. I had a tread test done on them yesterday, and they came back at 4/32s, 5/32s, 5/32s, and 10/32s, the last one being the tire I replaced that blew up on the way to Seattle last year. 2/32s is the legal limit, and 4/32s is where you basically stop having traction in the rain and snow. I might have been able to squeeze another […]

I’m just heading out the door to take my car in to get looked at. There’s nothing wrong mechanically with it, but Mazda called me out of the blue last week and asked me to swing by so they can look at my stereo. Apparently they might have put in the wrong one when I had it replaced about a month ago (which is strange, because it works and fits fine). I suspect there’s some recall they aren’t telling me about. But anyways, they are going to replace the CD player I imagine, and they also offered to detail my […]

The following is a guest entry by noted podcaster and new media guru, John Bollwitt. The true reason why I’m making this post is to make a guest appearance on Duane’s blog for Blogathon 2008. In fact, he tells me that the only way he’ll give me a ride home so I can go to bed is to make said post. But in a moment of “behold the power of blogging”, it made me recall a thought I had today about owning a car in general. Plain and simple, Rebecca and I don’t own a car. Part of it is […]

A Day In The Life

I actually hit the sack before midnight last night, which is pretty much an unprecedented event in my life. The main reason was because I had to get up early and take my car into the shop to get some TLC. While on my road trip a few weeks ago, a few things suddenly stopped working, including the door lock switch on the driver’s side door, the CD player (it currently does a better job grinding CDs then it does playing them), and a small problem with my gear shifter. In addition, my car is about one year past the […]

Mazda 3 And The Dreaded Door Attack

A few years ago my mom convinced me that I should finally ditch my 1993 Toyota Tercel (which seemed to be running on only 3 cylinders) and upgrade to something nicer. After spending a few days test driving cars, I finally went out and bought a 2006 Mazda 3 Sport Hatchback. For the most part, it’s been a really great car. The mileage isn’t super amazing (it’s not that bad either, but definitely no Prius), but it’s fun to drive and it looks pretty sexy (for a hatchback). The only downside is that last year Mazda admitted to a problematic […]

Last weekend, I got together with Boris, Dustin and Dori, and headed up north of Whistler towards Birkinhead Lake. It was a last minute trip, decided upon while we were all under the influence, but we all decided we could use a break from the city. So on Saturday morning, at the crack of dawn, we all piled into my car and set out on the quest for fish (which would later become the quest for nachos). Surprisingly, everyone’s camping gear fit into the back of my hatcbback, but I think next year I’m definitely going to get a roof […]