My Visit To Malta

I left Vancouver approximately five weeks ago, and headed for Malta via Paris. My ultimate goal was to end up in Serbia, but I thought I would stop and visit two friends of mine that I met in Kuala Lumpur last year: Krisztina and Debbie. Here’s a summary of my one-week visit to Malta. Despite all the travel I do, I actually really hate flying, and would say I have a mild phobia. To counteract that, I usually have a bottle of Ativan (anti-anxiety medication) with me on the plane. For short haul flights (generally less than an hour or […] 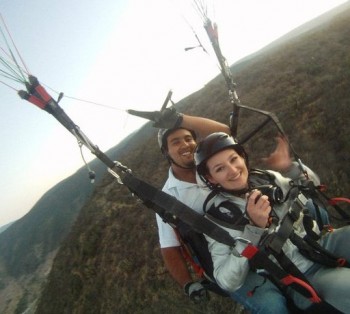 This is the first post in an ongoing series where I’ll be featuring a few of the travellers I’ve encountered on the road or whose web sites I’ve frequented during my travels. First up is Alexandra Kovacova, also known as the CrazySexyFunTraveler. I’ve chatted with Alex a few times on Twitter about travel, and asked her a few questions which she graciously answered for this post: First, what’s your name and where are you originally from? My name is Alexandra Kov·Ëov· and I was born in a small Slovak town Snina. People at home call me Saöka, but abroad I’m […]

As many people know, I’ll be heading to Europe right after my trip to New York City. I officially arrive in Ireland on April 6th, and will be spending the next few weeks around the United Kingdom. Europe is expensive, there’s no doubt about it. Most hotels are around $150 a night for anything decent, and many hostels get bad reviews for what they charge. Since I’ve been living pretty cheaply in Argentina, I’m going to live it up a bit in April. Ireland was definitely on the schedule, as was London (briefly, as I’ve been there before) and Paris. […]

I booked my ticket across the pond tonight. In April of 2011 I’ll be leaving New York City and heading to Shannon, Ireland aboard Continental airlines. My friend Andy is living near Shannon with his girlfriend right now (she’s in med school over there), and I told him recently here in Chilliwack that I’d like to come for a visit. So, now it’s official! While I’m not much of a golfer, I’m eager to play a game of golf with Andy in Ireland, for the geography alone. I really haven’t seen much of Europe. I spent a week in northern […]

So I gotta jet.. Here are the photos from London.

Now that I’m officially done what I came to do here in Finland, it’s really time to let loose and party it up a bit… I just demolished my first beer here in the Oulu airport, and am now working on beer #2 waiting patiently for my plane to board. I’ve spent the last hour researching cool spots to go drink beer tonight in Helsinki, and I have a few in mind that I’m going to check out later.. I can’t be too drunk or out too late tonight since I have lots to do in London tomorrow, but I’m […]

I approximately 24 hours, I’ll be stepping off a plane at Heathrow and rushing madly to see some of London before my connecting flight to Vancouver leaves in the early evening. I think I’ll probably only have about 3 and a half hours to see London, which I’m sure doesn’t give me much time to see very much. With the time constraints, it looks like I’m gonna shell out $100 for the express train that goes from the airport to Paddington Station near central London. From there, I’m really not sure what I’m going to do. It still seems like […]

I’ve been in Oulu, Finland for a few days now, and thankfully last night I actually got to go out and see a few things. Jari and Seppo were nice enough to take me to a pretty fancy Russian restaurant last night where we had some great food, nice wine, and of course some type of random vodka shot. Afterwards, we sort of started our own mini pub crawl, checking out a few of the bars in the Oulu downtown. I really love the architecture over here. I’m not sure how you’d really describe it, but everything is really quant […]

Live from Oulu, it's Wednesday morning…

So my body decided that it would take a brief unscheduled break from sleeping at around 2am this morning.. I decided in that time I would throw a few photos up from yesterday (I don’t have that many). Oulu is pretty quaint so far, and I’m actually really eager to walk around and see some things (since the architecture looks really cool from my hotel window). I have to be on-site around 9 this morning (which means I need to get back to sleep), but afterwards I think my hosts are all taking me for dinner. For the most part, […]

Far Away From Home

When I lived in Ottawa, there were times when I used to get a little homesick and miss Vancouver and Chilliwack. When that happened, I was fortunate enough to stumble across a little website called KatKam.ca. It’s a live webcam that points into the direction of the evening sunset, only a block or so away from my apartment in Vancouver. To this day, I always religiously check it out from time to time when I’m out of town, just to see what I’m missing back home. Here’s a shot of the sunset tonight that I missed. I’m heading to the […]