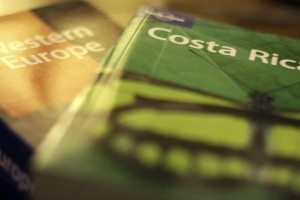 I’m one of those people that always purchases travel health insurance whenever I go out of country. Normally you just go down to the insurance broker, fill out a bit of paperwork, and leave with an insurance policy that will cover you in the event of any emergency. I figured (incorrectly) that it would be just as easy to obtain insurance for my upcoming trip, which is why I left it until the last minute. I’ve slowly been chipping away at the problem for the last month or so, and finally managed to acquire some insurance. British Columbia’s MSP Most […]

So, I had to wear a pulse oximeter over the weekend and ended up back in Burnaby this morning to go over the data recorded by the machine. The final verdict is that I have a mild form of sleep apnea, which basically means that I stop breathing from time to time during the night, and it usually causes enough stress on my body to make me to wake up so that I can breathe. Given that I’ve had high blood pressure most of my life, and that high blood pressure is often a symptom of sleep apnea, it’s possible […]

Just got a call from Vancouver General Hospital. Turns out in just a few weeks I’ll get the privilege of relaxing inside a big metal tube for an hour down in the MRI clinic. Apparently I can wear my own clothes, as long as there isn’t any metal on them at all. Otherwise the metal will probably rip out and go crazy in the huge magnetic fields. The good news is that MRI’s don’t use radiation, which means my super powers will probably not be affected this round (I figure with all the CT scans and X-rays I had last […]

Oh you can poop, you just can't poop here

Warning — you’re probably gonna hear far too much information in this post, but I need to vent a bit. Ever since being discharged from the hospital, I’ve had some pretty bad digestive problems. It started with just your run of the mill diarrhea, but has slowly gotten worse over the last month. Lately I’ve been waking up a bit crampy, and have to hit the bathroom fairly often during the day right now. I spent the other evening searching on the internet, and finally pinned it down to antibiotic associated diarrhea, due mainly to the IV and oral antibiotics […]

Clusterfuck in the O.R.

As most of you know, I have been waiting anxiously to have my surgery performed down at St. Paul’s. About two weeks ago, I had a meeting at the hospital with my surgeon (where I sat and waited for three hours just to sign a few forms) where we discussed the surgery date (which was supposed to be this week), and a few of the details. I called last Thursday to try and nail down an exact date, but they said they wouldn’t be able to give me one. So today, I called down to the doctor’s office to find […]