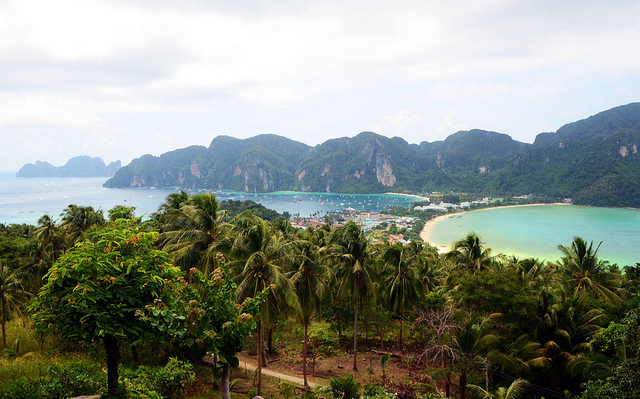 After leaving Koh Tao, I took the ferry back to Koh Samui and boarded a Bangkok Airways flight for Krabi. Krabi is a little town on the west coast of Thailand, and one of two gateways over to the Phi Phi Islands (the other being Phuket). Given the distance between the two locations, I couldn’t find another way to get to Koh Phi Phi in one day, other than to fly to Krabi instead of bus. So that’s what I ended up doing.

The ferry was late getting back to Koh Samui, and even though I had pre-booked a taxi and had him waiting for me, I was probably about 30 seconds away from missing my flight when I hit the airport. In fact, they originally told me I couldn’t get on, but I begged and pleaded and pointed out that I didn’t have any luggage to check, so they finally relented. But it basically meant I had to run to the gate, and a pile of people had to coordinate my arrival onto the plane with walkie talkies.

Koh Phi Phi is one of the most beautiful island chains in the world. When the ferry pulled up, the scenery definitely didn’t disappoint.

While diving is pretty big in Phi Phi, I would probably say that partying is even bigger. In fact, the entire island of Phi Phi Don reminds me basically of a smaller full moon party, but basically every night. They sell buckets of liquor, and you can find people jumping “fire” ropes down at the beach (mostly just skipping ropes that light up in this case).

Unfortunately my laptop died on me two days into my visit to Phi Phi, and I had to scramble to get it going again. I originally decided to go to Phuket to an authorized Apple reseller and see what they thought. I was hoping it was the charger, but it turned out not to be the case. When they plugged in a new charger, it still wouldn’t charge or turn on. They wanted me to leave it there to be fixed, but I didn’t really want to leave my $2,000 laptop in Phuket, especially since I had no plans to return back there in the future. I started the process of buying a new laptop in Phuket (thinking I could just sell it in Auckland in a few weeks after getting my laptop fixed there), but stopped it the moment I found out the keyboard had a Thai layout (which I figured would make it a lot harder to sell outside of Thailand).

So I basically decided to head to Kuala Lumpur a few days early, with the intention of getting my laptop fixed there, or buying a new laptop with a US keyboard. Unfortunately that basically meant I wouldn’t get a chance to visit Koh Phi Phi Leh, which is where The Beach was filmed. But at least I have something to possibly look forward to on another visit.

Regardless, Koh Phi Phi was a gorgeous place, and it definitely should be on the itinerary of anyone who visits Thailand. Right now I’m in Kuala Lumpur and having a great time, which I’ll happily detail in my next post in a few days.