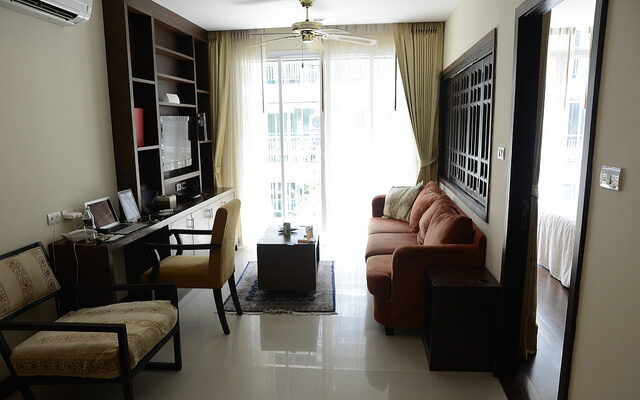 After nearly 18 hours of flying, I finally landed in Koh Samui a few days ago. My friends Scott and Samantha had an airport shuttle booked for me, so I simply got in the shuttle after landing and headed down to my new apartment here.

The place I’m renting is about a 10 minute walk from the beach, but it’s in a new complex with a pool, internet, maid service (for $5 a pop), and air conditioning. Normally these units run for about 21,000 Baht/mo (around $700 CAD), but because we were renting two units for two months each, Scott managed to negotiate down to 18,000 Baht/mo ($600/mo), which is a great deal.

Living room in my apartment

It turns out that most people around here get around the island with motorized scooters. When I was in Costa Rica a few years ago we rented some for the day and it was a lot of fun. But I haven’t had a chance to ride a scooter since then. Riding a scooter isn’t too bad, but people here drive on the opposite side of the street from us in North America, so I’ve been obviously a bit cautious. We’ve all decided to rent scooters for our entire trip here, which costs roughly $100/mo for the ones we have. In terms of gas, they sell it on the streets in 1 litre bottles for 40 Baht (about $1.33), so you simply pay for a bottle, grab a funnel, and fill your scooter up a litre at a time. And yes mom, don’t worry – we’re all wearing helmets.

A beach we went to on my first day here

Compared to Argentina, Thailand is infinitely easier to navigate for an english-speaking expat like myself. In Argentina it took me a few weeks to sort out how to get a SIM card for my phone. Here it took me all of about ten minutes at the airport. They even give you a little print out of the instructions in english, which made things super simple; In Argentina I had to stumble through the procedure for topping up my phone by myself, and it was a challenge. There’s no 3G on the island we’re on, but I’m paying $700 Baht/mo for 3GB of Edge, which is about $23 a month.

A little temple down the road

There’s no real big grocery store within walking distance, so we had to take our scooters down to the Tesco to get groceries. Since carrying plastic bags on a scooter doesn’t really work, we’ve simply been taking our backpacks and filling them up on each trip we’ve made. I did two trips yesterday and now have most of the basics around home for making coffee, curries, pad thai, and enough snacks and what-not for a few days at a time. I’ll probably have to hit Tesco a few times a week, but it’s only a 7 minute scooter ride, so it’s not bad.

It was nearly impossible to find foreign foods in Argentina, but at the Tesco here there are a few aisles of imported foods, so it’s easy to find some of the comforts from back home. In addition, most of the foods in the grocery store are labeled in both Thai and English, so there’s no real guesswork with trying to figure out what items are.

The only hitch that we’ve hit so far is that the internet in our apartment complex is slow to the point of being unusable sometimes. Scott and I did a bit of investigating yesterday, and given that there’s packet loss even between the rooms, we’re thinking there’s an issue with the setup here. Thankfully the owner is receptive to us helping out, so sometime today Scott and I are going to head into the communications closet and see if we can improve the situation a bit. Otherwise getting work done during the days is going to be a slow and frustrating process periodically when we have to connect to North American servers and what-not.

There’s a decent gymnasium up on the roof in our complex, and the elliptical machine has a great view of the ocean (in North America they would have put a penthouse on the roof with the great view – here they put a gym). I’m hoping to use it a few times a week and hopefully try to work a bit of fitness into my routine.

Ocean view from the roof

On Friday night we went down to a night-market near our apartment complex, and walked around drinking alcohol and sampling all the great food from all the vendors. Every 100 yards or so you could buy another drink from a booth for around 50 Baht ($1.66), so we just casually walked around the vendors and did our own mini pub crawl. I think it’s going to be a weekly event we partake in since it’s a lot of fun with a lot of activity around here.

I haven’t quite decided what my work schedule will be like out here. I’m thinking I’ll probably work during the days a few times during the week, and the evenings on the other days so I can sync up with Dale in North America. On the days I go to the gym I may simply spend those days down at the beach or doing errands around town, and then do some work in the evenings when it’s a bit cooler. But I’ll just play it by ear for the next week or so.

Scott and Sam, ready for a scooter adventure

But so far I’m having a blast in Thailand, and I think it’s ultimately going to be a far more enjoyable experience than I had in Argentina. Scott and Sam are in the condo next door to me, and already we’ve had a few shared meals and drinks late into the evening: it’s great having some company around to explore and socialize with.