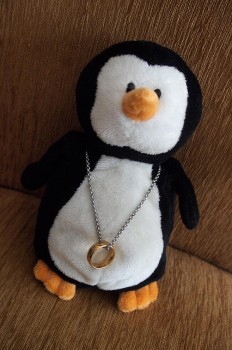 As per my last post, I was supposed to spend the weekend in Bangkok this weekend and then head to Auckland on Monday. But given how people are evacuating from Bangkok, I decided to try and change my flights around to get out before things get even worse.

Even the smallest penguin can change the course of the future

Thankfully most airlines (including mine, Air Canada) are offering free change fees on flights to and from Bangkok due to the flooding crisis there, so my ticket was eligible for a change. I tried calling last night to sort it out, but unfortunately due to the time change I didn’t get the ticket office in time before it closed. This time I managed to get it in time, but was originally told there were no flights out until Monday on Malaysia Airlines (which is the carrier I was on). I then asked if they could put me on another partner’s carrier instead, and they said they’d look. After about ten minutes of poking around they found a Thai Airways flight leaving Bangkok for Auckland, so I changed everything to that.

In fact, it works out quite a bit better in the long run. Malaysia Airlines isn’t a part of the Star Alliance network, so I wouldn’t have been able to accumulate any mileage on them. Thai Airways is, so I’ll bank another 6,000 miles or so. I also had to bounce through Kuala Lumpur before, sit in the airport for ten hours, and then proceed to Auckland, arriving there shortly after midnight (which makes getting a hotel tricky). With the new arrangement I leave at 7:30pm at night and get into Auckland at around noon on Saturday. So in general it’s just a way better arrangement.

That means tomorrow is my last full day and night in Koh Samui. Tomorrow evening I’ll do a bit of packing, some cleaning, and then head out for one last evening of dinner and drinks with Scott and Sam.

So in about 36 hours I’ll officially be migratory again, and once again heading into the southern hemisphere for yet another summer season. I’ll do a post about Thailand on my way out, but in general I had a really great time visiting the land of smiles and some of south east asia.