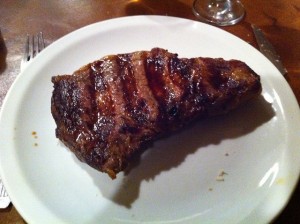 I’ve managed to do a weekly update on the past two Fridays of the month, so I think going forward that’s going to by my goal for the rest of the trip.

First off, I’ve been here a little over two weeks now. The total length of my time in Buenos Aires is about 12 weeks, so that means I have around 10 left I think. My first week here was a bit challenging, mostly for the language barrier. I spent a bit of time brushing up on my spanish, and week 2 definitely was a bit easier.

This week I finally found a private spanish teacher and have been meeting her for two hours a night on Monday, Wednesday and Friday, so that’s an extra six hours a week. We’ve mostly been reviewing old content, so I wouldn’t say I’ve learned too much new during lessons, but I think she’s just trying to make sure the groundwork is in place before we start moving onto harder topics.

I pay 60 pesos an hour for my lessons, which is on the higher side of what most people pay here. But she meets me at a little coffee shop about a block from my house, which is convenient for me. So all in all I pay about $30 CAD for two hours worth of private lessons, or around $90 CAD per week. I’ll probably stick it out for at least a month and see how I’m doing. After spending 8 years of my life in university, studying and learning new material isn’t a problem for me, so I’m hoping my lessons ultimately give me an embarrassment free avenue to practice speaking the language and trying to improve. But once I hit a certain point (where I can stumble ahead in most conversations simply by asking the right questions), I may switch back to a book to continue the learning process.

If you like food, chances are that you won’t go hungry in Buenos Aires. You can find beef and chicken in most restaurants, as well as salads and empanadas. Due to the heavy Italian influence on the city, you’ll also find plenty of pasta and pizza here.

I’ve gone out for three fairly nice dinners since arriving: mexican, steak and pizza. The mexican restaurant we went to has probably been my favourite so far, as the food was great as was the atmosphere. I think I had a really nice fajita dish for around 60 pesos ($15).

The steak I had at Don Julio’s was really good as well, but I wasn’t as completely blown away by Argentine beef as I was hoping to be. In fact, after doing some research it appears that much of the industry has started switching to grain-fed beef, which I find a bit disheartening. I went out for another steak the night after, and I found it about the same. Maybe it’ll grow on me, but I’ve definitely had steak back home that was on par with what I had here (sorry Gus).

I’ve had pizza twice now, and both times I’ve found the meal very enjoyable. While I’m told you can find North American style pizza in some restaurants here, the pizza I’ve had has been a thin-crust variety with only simply toppings and spices. But truthfully, the simplicity of the meal made the pizza that much more enjoyable to me, as you can taste the individual elements and savour them.

Portion sizes here are definitely way smaller than back home as well. I actually really like that. I hate leaving a pile of food on my plate, so I usually clean it off. When you do that here, you’re never bursting at the seams like you are back home, so I prefer the smaller sizes. Plus, it’s easier to get a manageable snack here for a cheap price (for example, you can get two fair-sized empanadas for around $2 CAD).

People who manage obesity say you should never be hungry, but you should probably never been extremely stuffed either. Like Tokyo, I find it hard to overeat here, which is a good thing and probably why most people here are fairly skinny.

As an example, the photo above is what a large coffee looks like in Buenos Aires. Compare that to a Venti Starbucks coffee, or the typical 16-20oz portion sizes back home. In fact, as I’ve often blogged about on my personal site, coffee (caffeine in particular) is one of those things which I’m fairy certain will eventually be implicated in the obesity epidemic in North America. So, when I look around and see a bunch of skinny people eating pasta and pizza, items which are uniquely fattening, I take notice of the fact that their caffeine intake pales in comparison to what we drink back home.

Last weekend I spent time down in the Japanese Gardens in Buenos Aires, and also the Recoleta Cemetery (where Eva Peron is buried). Both were well worth the effort, and provided for some great photo opportunities. I haven’t blogged about the Recoleta Cemetery yet (in fact, I have an ever-growing list of things I should probably blog about), but read about my visit to the Japanese Gardens here.

Tomorrow I’m also doing a day trip over to Montevideo, Uruguay which should be a lot of fun. I have to be up at some ungodly hour (5am?), but will then get to spend the day taking photos, which I’m looking forward to. There’s also 5 hours worth of ferries to deal with, so I’ll bring along some reading material and enjoy the trip.

I just realized last night though that I don’t have the ability yet to charge any of my camera gear. I have an adapter that works for my laptop, but nothing that I can plug directly into the wall. So I need to pick one of those up, otherwise I imagine my two cameras are going to die slow and horrible power deaths here.

So, two weeks down, and still lots to see, do and learn. I’m definitely enjoying myself here, and looking forward to improving my spanish each week.