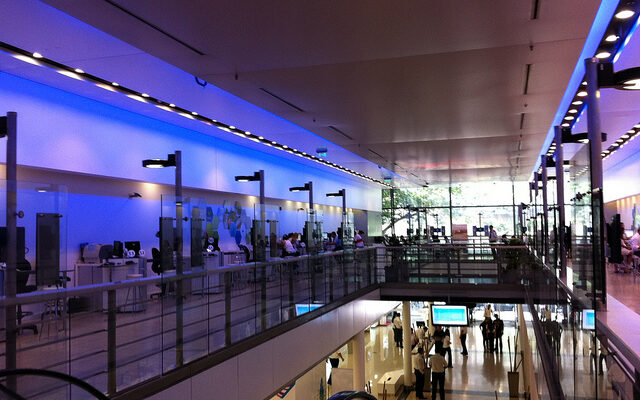 I’ve been here three weeks now, and have most of the basics figured out. But definitely one of the hardest problems I’ve had to solve in Argentina so far was how to get a SIM card in Buenos Aires and ultimately top it up with funds.

There are two large GSM cell carriers in Buenos Aires: Claro and Movistar. Having investigated them both prior to moving to Buenos Aires, I came to the conclusion that Movistar offered the best deal for pay as you go plans.

First, why Pay As You Go? Unfortunately unless you’re a local and have a DNI card (a local resident card) you can’t get a phone on any type of contract. That means the only option is a Pay As You Go plan, such as the Movistar Prepago one.

The main benefit for the Movistar plan is that they offer a 3G data option that costs 10 pesos for 48 hours worth of usage, which is a great deal. Movistar also offers promotions where they’ll double your credit if you add funds on a certain day, which has the potential to reduce the costs from 10 pesos for 48 hours to effectively 5 pesos for the same time period.

Where To Get A SIM

I figured I could hit up any Movistar office in the city and get a SIM. After trying three different ones I finally came to the conclusion that the only place to get a SIM card was down at the main Movistar office on Sante Fe Avenue and Callao. It’s quite a hike from Palermo, but definitely walkable in about 45 minutes or so.

My Spanish was absolutely atrocious when I arrived, so I had to ask to speak to someone who spoke english. Strangely enough, there was only one person in the whole building who did (that’s a common occurrence down here – it’s very hard to find english speaking people at most local businesses).

I was given a number and had to go up the escalator to the waiting area and wait to be called. It took about 10 minutes of waiting, and eventually someone came and led me back downstairs to someone who was going to help me.

Unfortunately this person didn’t speak English, so we both had to muddle through it. They were actually extremely patient with me and definitely went out of their way to help out.

The first glitch we hit though was that they didn’t have any micro SIM cards for the iPhone 4. Since I had just spent three hours walking around trying to sort this situation out, I wasn’t about to leave. So, I convinced them to just give me a regular SIM with the intention of cutting it to fit the iPhone 4 myself.

Other than that, the process was fairly painless, and after about 10 minutes I walked away with a SIM card for the low price of about 10 pesos ($2.50 CAD).

One thing to make sure you bring is your passport – they have to fill out the passport information on your application. You won’t be able to obtain a SIM without it.

How To Add Money To Your SIM Card

Great, now you have a SIM card. Unfortunately until you add money on it your phone is completely useless.

This actually leads me to my most frustrating experience in Buenos Aires so far. I walked around looking for a place to recharge phones and ultimately found a “RapiPago” kiosk with a line up of people in it. I figured (incorrectly) that this was the place to top up my phone, so I walked in with a pile of Movistar documentation and tried communicating my desire to have my phone topped up. After three or four minutes of frustrating the hell out of the girl behind the counter, she passed me off to another guy who punched a pile of numbers in the computer, handed back my documents and basically asked me to leave.

In retrospect I think the RapiPago kiosks are for people attempting to pay other bills, such as regular phone bills. So me walking in with a pile of Movistar documentation must have seemed pretty weird to them. Unfortunately I made the long walk home from the kiosk in absolute shame, discouraged by the fact that I had a phone I couldn’t add funds to.

Thankfully a friend of mine arrived from Vancouver a few days later and helped me sort everything out. The places you’re looking for generally have a sign out front that says “Movistar Recarga”. The majority of these places are simply little corner stores that sell soda pop and chips.

Some of the places will sell your prepaid cards in 10, 20, 30, and 50 peso denominations. The only problem with them is that you have to call into the phone system (which is in Spanish) and add them to your account that way. It’s possible, and probably only difficult the first time, but I haven’t used that approach.

The other way is to find a store that actually adds the funds directly to your account. There’s one about a block from where I live, and I simply walk in, give them my local phone number along with 30 pesos or so, and boom, I have funds on my account instantly – in fact, you’ll get a SMS message while you’re at the store.

Whenever possible, wait for a Movistar promotion before adding funds to your account, as in most cases you can obtain double your money value by simply waiting a day or two.

The only aspect of Movistar I don’t like is that you don’t get any indication when one of your optional plans (such as the 48 hour 3G data plan) expires. If you don’t time it right, your plan will expire while you’re still using data. The end result is you’ll burn through the entire credit on your account by just checking a few emails (since the data is no longer included, and is being charged at a per kilobyte cost). As a result, I generally don’t add too much money to my phone at any one time, fearful that I’ll accidentally forget to shut off data and burn it all up in just a few minutes.

I highly recommend setting a schedule to activate the data plan, either in the morning at 8am every second day, or in the evenings. It doesn’t matter what it is, as long as you stick to it.

But, once you get your SIM and figure out a reliable place to add funds to it, you’re good to go and will have a functioning cell phone in Buenos Aires.

I was recently back in Buenos Aires, and this time I simply was able to obtain a SIM card from a Kiosko (those little places that sell cigarettes everywhere). Your mileage may vary, but I don’t think it’s necessary anymore to go all the way down to the Movistar office just for a SIM anymore. Maybe you can get a better plan that way, but I was able to get a SIM this time from a Kiosko, and that SIM could even do data as well.