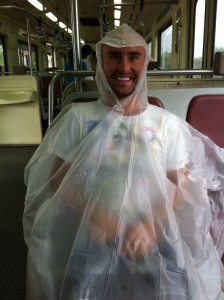 Yesterday some friends and I decided to make the journey over to Tigre, which is a little town on the Delta about an hour outside of Buenos Aires. On a normal day it may have been a lot of fun, but the weather turned sour on us and pretty much ruined the trip.

No matter though. We rolled with the punches and found humour in crappy situations.

The train to Tigre leaves from the Retiro train station. I had thought we would be able to use the subte (subway) to get part way there, but would have to taxi the last part of the journey. Once we got on the D-Line though, we realized that we could simply transfers at the 9 de Julio station and catch the C-Line to Retiro station, which is what we did.

Somewhere along the way we had learned about a scenic train to Tigre called the “Tren de la costa”, “Train of the coast”. We had asked about that train in Retiro and they said to take the train to Mitre, and then transfer there. The initial train was only around 2 pesos per person, which super cheap. So we hopped on the train and headed to Mitre.

The “Tren De La Costa” was actually a lot more money – around $38 pesos per person for a return trip. We figured the train was probably pretty classy for that price, so we were eager to check it out. Not only is the view pretty crappy on the train though, but there aren’t really many seats. So some people actually paid a premium to essentially stand on the Tren De La Costa.

In Argentina us foreigners joke about a “gringo tax” from time to time. Essentially it’s a tax that seems to be added at the last minute when someone realizes that you’re not a local. We all sort of felt that the Tren De La Costa was basically a train for Gringos. There’s actually a train that takes you to Tigre from Retiro that costs about 2 pesos, and there’s no real benefit to taking the Tren De La Costa for 38 pesos. So I would definitely skip it.

We found our way to the Delta from the Tren De La Costa stop, and walked around briefly. It was raining pretty hard, and none of us were dressed for the occasion. Andrew wanted to go find a cheap jacket, so we took him shopping, eventually finding him a little plastic poncho (which I thought looked more like a garbage bag) for 22 pesos. But, he was probably pretty thankful he was dry at that point, even though he looked like a ghost walking around.

There were probably a lot of cool boat tours we could have gone on, but the weather just wasn’t cooperating. We found a little restaurant someone recommended to us, so we decided to grab a bite there. It was basically diner food, but it filled the spot.

Afterwards we decided we would forego getting any wetter and simply grabbed the train back to Retiro station. Even though we purchased return tickets for the Tren De La Costa, we simply decided to take the direct train all the way back, saving ourselves a transfer and about 30 minutes of travel.

At the train station on the way back they decided to do a random inspection to see who had proper tickets. It was actually strange to watch a pile of locals simply make a run towards the turnstyles, jump them, and then run out of the train station. Unfortunately that’s probably the route we should have taken, since the guards at the exit decided to put a gringo tax of 10 pesos on Cintia for allegedly losing her ticket (even though she showed it to the guy, who then collected it, dropped it on the ground, and sent her to the next guard). So, we had to basically pay 10 pesos to leave the train station.

While we didn’t really get to enjoy Tigre, it was still an adventure so was pretty fun. Andrew, Cintia and I all took a break and each went back home to recharge for a few hours. Then we met at Bella Italian in Palermo and had one of the better meals I’ve had here. In was in northern Palermo, but it’s well worth visiting. It’s one of the few places that serves a steak in any kind of actual sauce, and it was a nice change from the norm.