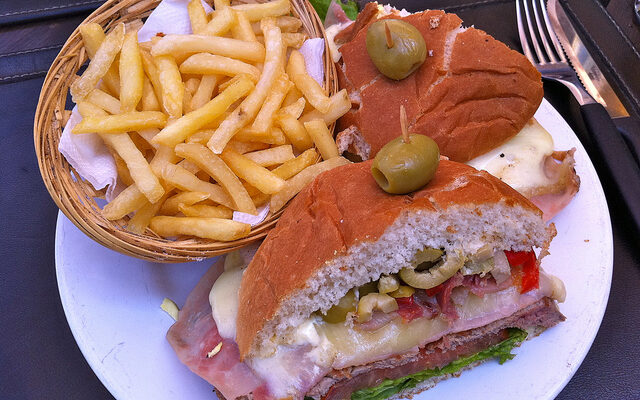 Last night I casually asked on Twitter if people reading this website would like me to blog more about food. Surprisingly the response I receive was the most vocal and energetic of all the things I’ve asked or done so far, so apparently my followers like to eat. So, going forward I’m going to try and write about all the unique foods or food related experiences I have while on my trip.

A few weeks ago I had mentioned to my spanish teacher that I was heading to Uruguay. Upon hearing that, she immediately asked me if I was going to be eating a Chivito. I had no idea what it was at the time, but she went on explaining that it was a really tasty sandwich consisting of beef, mayonnaise and other tasty fixings. It’s actually the official food of Uruguay, so they take the Chivito pretty seriously there.

So of course, upon sitting down for dinner I immediately started scoping out the Chivito. They had three different options at the restaurant, a simple Chivito, and Chivito Canadiense, and a Chivito al Plato. I forget what the simple Chivito was (I think it didn’t come with fries and also had less fixings), but the Canadiense looked really tasty, and came with french fries (papas fritas) as well.

The word Chivito actually means “little goat” in Spanish. The story goes that some lady entered a restaurant once and ordered goat, thinking they served it like they do in Northern Argentina. Not having goat, the owner of the restaurant tried to fix her something special to compensate, and thus the Chivito was born.

A typical Chivito contains beef (a very tender cut, such as filet mignon), mayonnaise, olives, mozzarella, tomatoes, sometimes bacon, lettuce, ham, and get this, a fried egg. It’s basically as much cholesterol as you can probably stuff into a sandwich without causing a coronary event the moment you stuff it into your mouth.

What does it look like? Well, here was mine.

I’ll be perfectly honest – this was probably one of the best sandwiches I’ve ever had. I’m actually not a huge fan of olives, but they perfectly blended in with the sandwich and added a bit of sweet and salty that really put the sandwich over the top. I’m a big fan of mayonnaise as well (I used to order Whoppers from Burger King with extra mayo as a kid!), and there was definitely plenty of that one the sandwich.

If a big sandwich isn’t your cup of tea, don’t worry. The Chivito Al Plato is a chivito that’s basically spread out over an entire plate. Russ ordered one of these bad boys and it came with potato salad.

If you’re in Uruguay, make sure you try a Chivito sandwich – you definitely won’t be disappointed. In fact, if you’re from North America or anywhere else in the world, you should do yourself a favor and try to make one at home. It’s probably the first thing I’m going to try making when I return, whenever that is.